Obese 'human dustbin' who ate 8,000 calories a day in takeaways sheds 17 stone in a year - after doctors said he was eating himself to DEATH

An office worker who was hospitalised due to health complications associated with his weight, has halved his size by overhauling his diet.

Craig Moody, 42, from Blackburn, Lancashire, has shed more than 17st after his over-indulgent lifestyle landed him in hospital for 18 days a year ago, when his weight tipped the scales at 33st.

The singleton, who wore a UK size 6XL at his heaviest, was told by medics that he was eating himself to death.

A self-confessed 'human dustbin', Craig would gorge on 8,000 calories worth of takeaways a day in addition to downing 20 pints of beer every weekend.

He ignored warnings from friends about letting his waistline grow, but when a nurse told him his days were numbered, he finally decided to do something about his junk food addiction - and now weighs 15st 12lb.

'The nurse told me I was really big, massively obese,' he explained.

'He said in his experience of working there, he remembered two guys similar to me had actually died. He said I was as big as they were.

'When a nurse says that to you, it really hits home.

'The difference it has had on my life is amazing. I am so much more confident now.

'I feel like I am floating and people have been giving me so many positive comments.

'I feel like a new person. I have got a completely new wardrobe and it's second nature for me to be active.

'I want to live my life to the full and I am proud of my myself. I want to give myself a pat on the back because I did something about it.'

Craig tracked his weight loss progress by posing for photos with his nieces at ten week intervals.

In less than a year he has gone from wearing 6XL shirts to an XL and has swapped his 58-inch trousers for fitted 38-inch jeans.

The office worker revealed that problems managing his weight started from a young age.

At school he was a 'big lad', despite taking part in weekly football sessions, and described himself as 'chubby but active'.

Craig left school aged 16 and whilst living with parents, he took up a part-time job which earned him enough money to go partying with friends every weekend.

Each night out would be followed by a calorific takeaway of cheesy chips, pizza or burger, and by the age of 21, Craig's weight had ballooned to 17st.

'I would go out every Friday and Saturday night and would easily drink eight pints and eight alcopops both nights,' he explained.

'I probably drank 30 drinks every weekend for about six years. I had no idea what it was doing to my body. It was just the thing to do with my mates.'

Craig maintained a similar lifestyle for years and by the time he hit 37, in 2013, his weight had rocketed to 25st.

As his diet spiralled, Craig would turn to takeaways for lunch and dinner with snacks of chocolate and sweets to satisfy cravings.

He admitted he 'buried his head in the sand' and avoided looking in the mirror as his weight continued to rise.

Over the next five years Craig piled on a whopping eight stone and said he was a 'human dustbin'.

The office worker began to skip breakfast, would only eat a sandwich for lunch and then, in the privacy of his own home, would gorge on huge amounts of food.

At least four times a week Craig wouldn't think twice about demolishing a large portion of pie and chips from the local chip shop - complete with eight or more slices of buttery bread and a fizzy drink.

He loved sausage rolls and 'vast amounts of bread', and would eat a full family-sized packet of crisps whilst sat in front of the TV after dinner.

'I just dismissed my weight and never came to terms with how fat I was getting,' he said. 'I was getting no exercise and was completely sedentary.'

'I stayed at home in the evenings and getting about day to day was a struggle. My mum and dad told me they were concerned about my weight but I foolishly ignored them. I tried a couple of diets but never stuck to them. I let myself down.'

He continued: 'I never really felt full or sick. I could eat huge amounts of food. It was binge eating. That's the only way to describe it. I'm not sure how I managed to hold a job down.

'My immediate family showed they cared. A close friend said to me when I was 40 that if I carry on I wouldn't see 45. He cared about me and was giving me a proper warning but I took no notice at all.

'Getting around was difficult for me at times. I would get out of breath walking up the stairs and just walking to the end of the street was an effort. I just ate for the sake of it. It was a disgusting amount of food.'

Craig's over-indulgent lifestyle caused him to be admitted to hospital a year ago when his weight hit 33st. He was diagnosed with edema after scans showed that his body was being 'flooded' with excess fluid.

The singleton was hooked up to a drip and passed seven litres of water in just 12 hours.

Hospital scans revealed his weight was causing a strain on his heart and that he was suffering with sleep apnea - causing him to stop breathing during the night.

During his short stay in hospital Craig had a frank chat with a hospital nurse that he believes 'saved his life', in April last year.

He continued: 'It was all caused by my weight. My organs were basically drowning in my own fluid. I was so overweight that my body couldn't excrete fluid.'

'I made a conscious decision straight away. The penny dropped that I had to lose weight. I thought to myself that I can't go on like I am. It really scared me.

'When I was still in hospital I ordered a salad and fruit off the menu. I was determined to make a start right away.'

After leaving hospital Craig took up a 1,500-calorie a day diet of bran flakes for breakfast, egg salad and fruit lunches and an evening meal of fish with either vegetables or salad.

He was able to make his own gym at home and now works out six times a week. His mother Barbara, 70, bought him an exercise bike, a friend from work gave him a treadmill that they no longer used, and Craig bought himself a rowing machine.

In less than a year Craig shed almost 17st, and now does 22-miles a time on his bike, and loves long walks.

The office worker whose aim is to reach 14st, currently weighs 15st 12lb.

'It has changed my life for the better and I would never look back now,' said Craig. 'I regret how I used to look. I wasted ten years of my life. I lost a decade and I want to make up for lost time.' 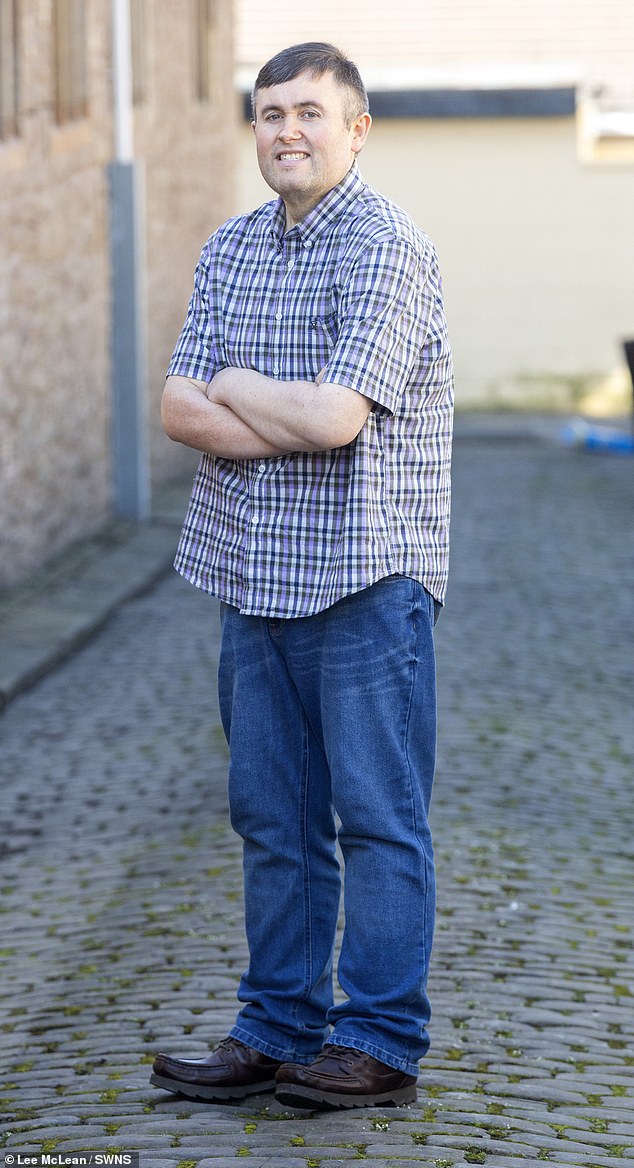 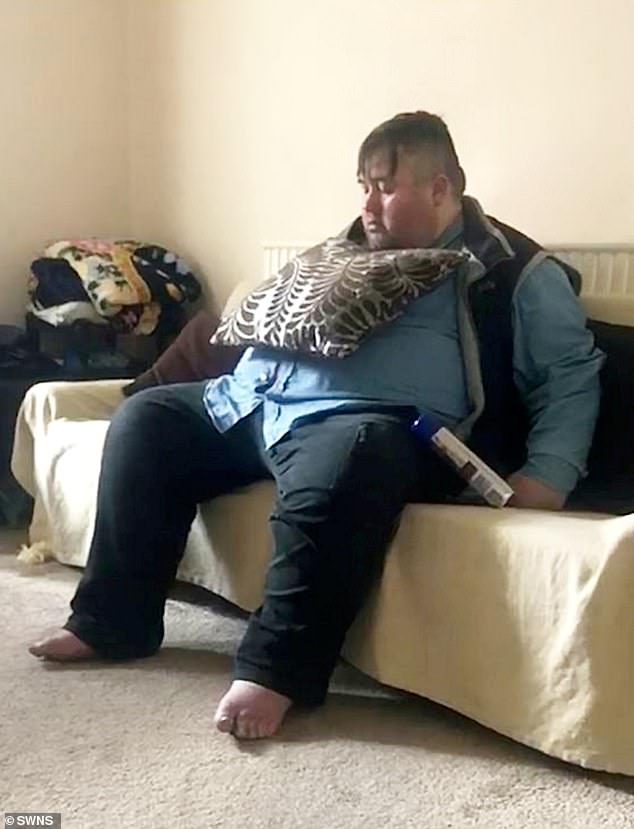 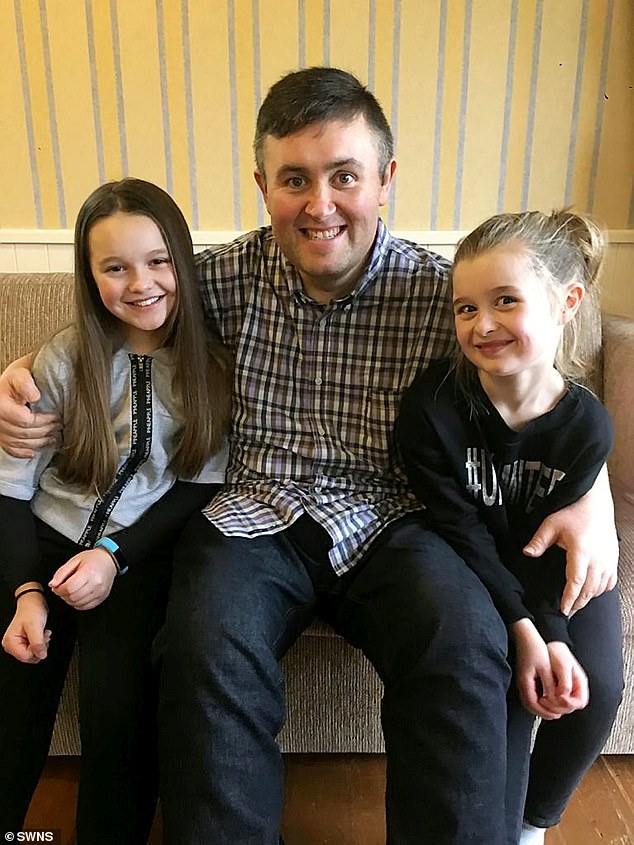