Patient with cancer makes friends with his donor on web

A touching story took place in the UK: a man with cancer became friends with his donor through anonymous correspondence. This strange at first glance way of exchanging letters was the result of British laws, according to which it is forbidden to disclose information about the donor and recipient for two years after medical intervention.Gary Hodges was diagnosed with acute myeloid leukemia, and he needed a stem cell transplant. Another 2 thousand people were on the waiting list with him. One day, Briton Karen Scoltocke saw a social video on TV calling for stem cell donation.

“She had been feeling low after the deaths of her father at 72 from lung cancer, and her 24-year-old nephew.

The 58-year-old mother-of-three remembers how grief had made her feel helpless. Watching the programme, she found herself inspired by an appeal for stem cell donors and decided to sign up,” BBC reported.

Three months later, she got a letter that she was a perfect match for Gary.

"Thank you for your kindness and generosity," he wrote to Karen. "Your gift of life is much appreciated and I will always be grateful to you".

But the pair continued to exchanged brief notes for the next two years, until they were able to exchange personal details. 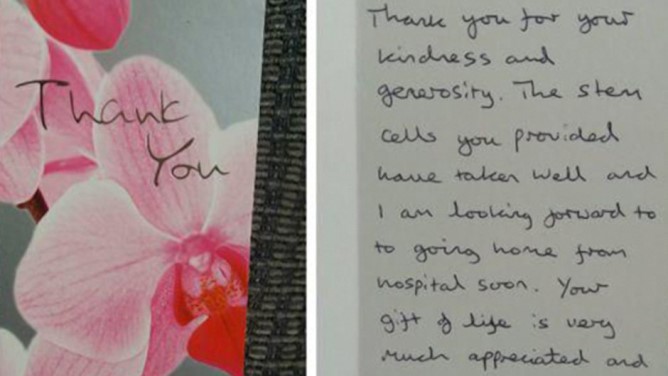