The British healthcare system is introducing a new, minimally invasive hip replacement surgery, after which patients can get up in a few hours and return home within 24 hours, not several days, Daily Mail reported.

Currently, many of the 95,000 Britons undergoing hip replacements every year will spend up to five days in hospital, unable to walk. But thanks to the new technique, 80 per cent of patients will be sent home within 24 hours.

“The approach causes very little damage to the tissue around the hip,” said Ashwin Kulkarni, consultant orthopaedic surgeon at University Hospitals of Leicester NHS Trust. “This means there’s less blood loss and pain, and recovery is much quicker. Patients are able to get back their full hip function very quickly.”

Another advantage of this approach is that it minimizes the likelihood of joint displacement several months after surgery (and after traditional surgery, this risk is much higher).

“Because we don’t dislocate the hip, it makes the joint stronger afterwards,” Mr Kulkarni added.

“The operation, which takes an hour, is normally carried out under general anaesthetic. With the patient positioned on their side, the surgeon makes the 5cm incision over the buttock. The hip muscles are moved to either side to expose the joint. While the incision is smaller than in normal hip operations, the surgeon can still see clearly inside. The joint is surrounded by a stiff layer of tissue called the hip capsule which is cut through with a hot scalpel to expose the ball. The surgeon then uses a drill to create a hollow vertical space inside the thigh bone,” the source noted.

In 80% of cases, if necessary, an endoprosthetics can be performed such a surgery, reducing the duration of hospitalization and trauma for patients. 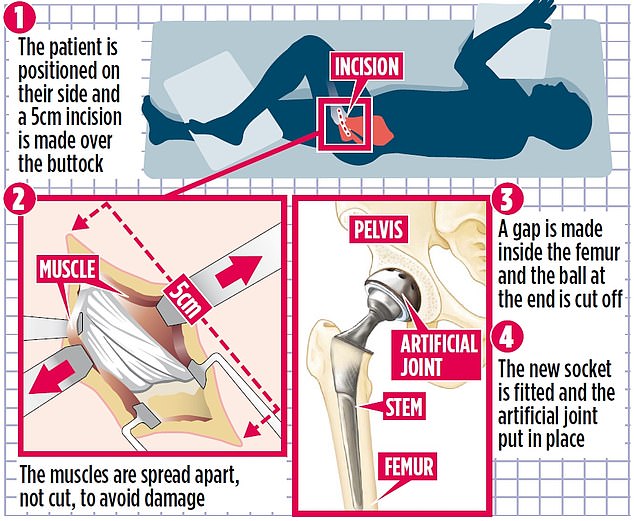 Ask the doctor: Is there a connection between sexual activity and prostate cancer?

Ask a doctor: Can bronchitis go away without treatment?

Ask the doctor: Can a brain tumor metastasize to other organs?

Ask the doctor: Can a detox-diet help lose weight?