Girl, 5, is unable to stand, swallow, and covered in rashes when she's not in the shade


In summer 2016, a few small rashes began spreading all over Kaia Ettingoff's body.

No matter what cream or ointment her parents, Kate and David, tried, the rashes wouldn't disappear.

After five months of doctors' visits, tests and scans, Kaia was finally diagnosed with a rare and life-threatening condition known as juvenile dermatomyositis.

It's an autoimmune disease triggered by the sun and it means that when Kaia, from Wayne, Pennsylvania, is not in the shade, she can be left covered in rashes.

Kaia's mother, Kate, told DailyMail.com that her daughter was two years old when the rashes first appeared on her elbows and knees.

'These rashes wouldn't go away,' she said. 'We thought maybe it was eczema.'

In fall 2016, the rashes then spread to Kaia's cheeks and fingers, so her parents started to take her to doctors' visits.

Kate said she read about juvenile dermatomyositis (JDM) after searching on Google, and suspected her daughter had the disease.

But five different doctors told her it was unlikely because it's so rare and that Kaia probably had eczema.

Finally, in January 2017, after being wait-listed for four to five month, her parents made an appointment at Children's Hospital of Philadelphia.

Within a couple of weeks, Kaia was diagnosed with JDM.

JDM is a rare autoimmune disease that occurs in children, and in which the body attacks its own cells and tissues.

It's triggered by the sun and leaves sufferers with skin rashes and muscle inflammation, which causes weak muscles.

JDM is very rare and affects between 3,000 and 5,000 children in the US, according to Johns Hopkins Medicine.

There is no cure for the disease, so treatment consists of medication, and sometimes physical therapy, to control inflammation, reduce pain and improve muscle strength.

'For me, [the diagnosis] was a relief because now we had a name and a treatment plan,' Kate said. 'For my husband, he never thought it could be something that serious.'

Once a week, Kaia went to CHOP to receive high doses of steroids in an IV and, once a month, she received Intravenous Immunoglobulin Therapy, better known as IVIG.

IVIG is a treatment made from donated blood that contains healthy antibodies to block any harmful ones from doing damage.

At home, she also receives methotrexate, a drug commonly used to treat certain types of cancer, but is given in small doses to JDM patients so fewer steroids can be used, according to Cincinnati Children's Hospital Medical Center.

'She was really responsive to that and we did that treatment for a year and we were almost off of it,' Kate said.

'But, in January 2018, we went to Disney World and she got a pink spot on her nose. It triggered the whole thing all over again.'

Kaia is now back on her regular treatment, and Kate says she'll likely need the small doses of chemotherapy for years.

Her mother says that, luckily, since receiving treatment, Kaia hasn't dealt with problems that other sufferers face such as being unable to stand or swallow.

'When she was diagnosed, she was having gagging problems so it was going in that direction,' Kate said.

The Ettingoffs have been advocating to raise awareness and funds for safer treatments, and a cure, and have received a great deal of support from their community.

Last year, the Make-a-Wish Foundation, a non-profit organization that grants wishes for children with critical illnesses, gifted Kaia with a tree house in her backyard.

Her parents say it offers her the opportunity to play outside without getting sunburned.

In February, Kaia's pre-school collected change for a fundraiser, which she went around to collect.

'She went to all the classrooms and talked about her condition,' Kate said. 'She understands it and she's very good at advocating for herself.'

Earlier this month, the family held their first Walk Strong to Cure JM in Philadelphia, raising about $35,000.

With summer just around the corner, Kate says her plan for Kaia is nothing more than making sure she wears a hat and is lathered up in sunscreen.

'Some parents just keep their kids indoors, but we want to make sure that she has a normal childhood,' Kate said.

She added that her biggest goal is to raise awareness so physicians can diagnose the disease quicker.

'I wish more people knew about JDM so that way we can make sure these kids can get diagnosed and get treatment before they end up hospitalized,' Kate said. 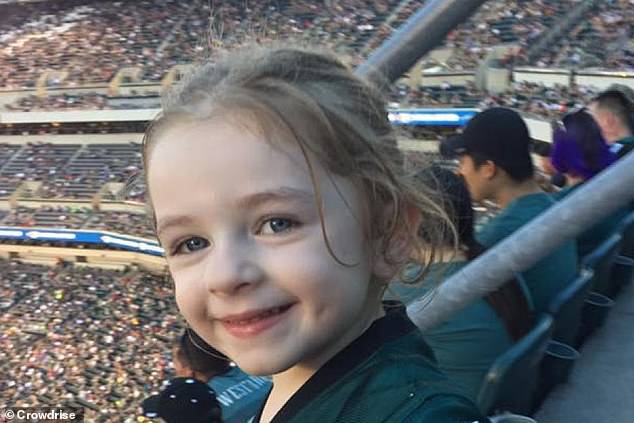 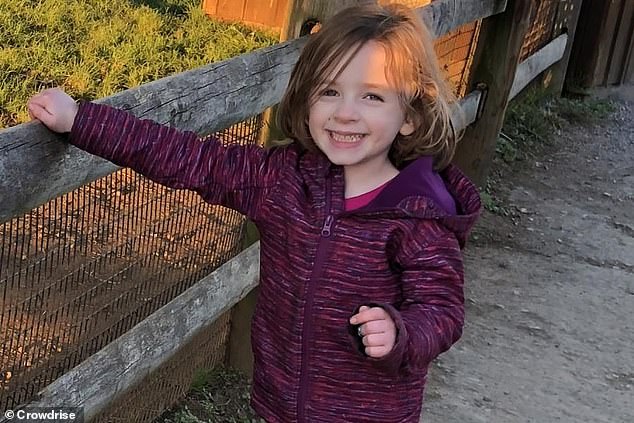 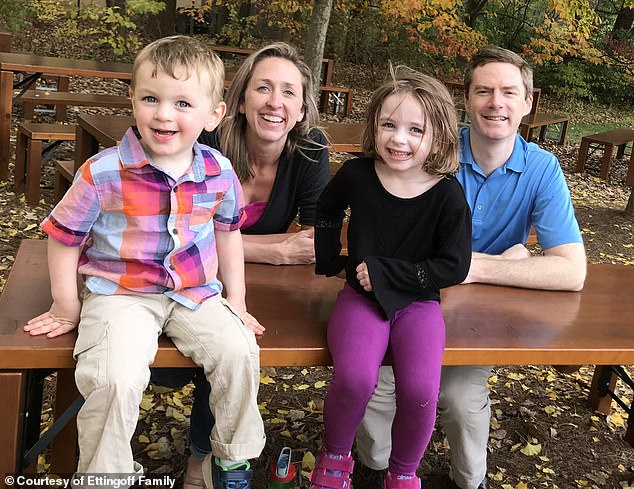